The investment problem has always been actual and relevant in the transition to a market economy. Depending on the solution of this issue, a sustainable development of the economy and social spheres is ensured. Investing in capital is a key factor in preventing production decline, ensuring economic growth, and raising competitiveness of enterprises. Lack of investment leads to the loss of sustainable development of the economy. It should be noted that the social role of investment requires more attention. Despite the fact that the investment is aimed at the achievement of a high income, the investment creates the basis for the social problems of the society, by implementing its investment project, while maintaining the interests of the society (William, 2001).

In the current article, the tourism area was taken as the goal of the social sphere. The essence of tourism is its socio-economic meaning. Economic sense is the ability to generate income as a field. The tourism area provides jobs, organizes its material resources, and creates appropriate funds. As a result of its activity, it earns profits. The social purpose is to create jobs, develop entrepreneurship and, to generate households in tourism regions relevantly and service sphere according to the needs of the population.

There are favorable natural-climatic conditions, historical monuments and other factors for tourism in Azerbaijan. On the other hand, the relative decline in the value of the manat (foreign exchange) against foreign currencies, including US dollar, has significantly reduced the level of prices for tourism services in foreign currencies in recent years, which has greatly increased the competitiveness of tourism sector in foreign countries in Azerbaijan.

It is known that our country is rich in natural resources (especially with hydrogen resources). However, oil reserves are depleted and world oil prices are unstable. At present, oil prices in the world markets remain low. In this regard, attention is paid to the development of the non-oil sector in Azerbaijan, including the tourism sector. Moreover, the development of the tourism sector contributes to the increase of employment in the country.

Relevant researches and results obtained can be used to conduct policies in the relevant government agencies in the tourism sector and to increase the effectiveness of the investments.

The approaches to studying social spheres from a variety of aspects have always been in the center of attention of both local and foreign researchers. At the same time, it should be noted that a number of important conceptual and practical issues of social spheres have been widely studied by neo-classical, neo-Keynesian and other world-renowned representatives, including the majority of Nobel Prize laureates in the economy and the IMF, World Bank experts. Although European and American research have been systematically used as a method of evaluating the effectiveness of social investment in INPUT, OUTPUT, Cost-Benefit-Analyzes, Econometric assessment but in Azerbaijan it is not considered in the social sphere (Nadirov, Samadzadeh, Nuriyev, Musayev, Ibrahimov, Alirzayev, Guliyev, Sadikov, Ahmedov, Salahov, Hajiyev, Hasanli, Huseynova, Muradov, Ahmedov, Rahmanov and others). Economics scientists of the country studied various aspects of social aspects have shown exceptional services. World economist scientists Marks, Engels, Smith, Ricardo, Keynes, Mill, Sey, Cob, Leontyev, Richard, Pareto, Rosenstein-Rodan, Nurkse, Hirshman, Bernal and others economics theories and scientific contributions could be noted.

- the impact of the social environment;

- political and financial-economic situation in the region and in the world;

Organizations and enterprises operating in the tourism industry must carry out the evaluation of the professionalism of the personnel. The results of this assessment are transferred to the field employment service by these organizations for further monitoring.

The main purpose of the staff training system and labor market monitoring is to identify the perspectives for the needs of the staff based on the socio-economic potential of the region and to aim at a thorough investigation of the relevance of the processes in the personnel training system.

It is known that investment decisions have a certain impact on revenue generation, including the increase in the number of employees. This is due to the fact that it takes a lot of time to build facilities, installations and other work, and to have the marketplace (advertising, etc.) on time. Therefore, the dependence on the number of employees working in the tourism sector will be assessed in the previous year (s) in the tourism sector. We will consider the following equation of regression:

- Number of employees working in specific areas for tourism, namely number of people;

– the amount of investment in t- year in specific areas for tourism in the previous year, by million manat;

are the parameters of regression equation,

–shows the extent to which the investments made by the parameter in t-years increases the number of jobs in the previous years. Here, the t-time indicator may indicate one or several years ago.

– characterizes by the parameter the effects of fixed factors, which are not considered. Specifically, the value of the

equation in Equation (1) indicates the base level of employees working in the tourism sector, regardless of new investments.u- is a random deviation.

is a set of conditions on the random boundary (conditions of Gauss-Markov). When these conditions are fulfilled, it is said that the values of Equation (1) found in the Minimum Quadratic Method of the Regression Equation (MQM) are consistent, inexpensive and effective. In other words, the econometric model reflected in Equation (1) is adequate and it can be used for analysis and prediction. Note that the evaluation of the t-time lag is determined by imitation in the econometric evaluation (Hasanli, 2014, p.24).

In order to implement econometric evaluation presented in Equation (1) the following official statistics have been collected (Table 1).

Table 1. The main indicators on specific areas of tourism

The econometric model has been formulated using relevant data in Table 1as a result of econometric evaluation via EViews Application Software Package of parameter of regression equation (1). 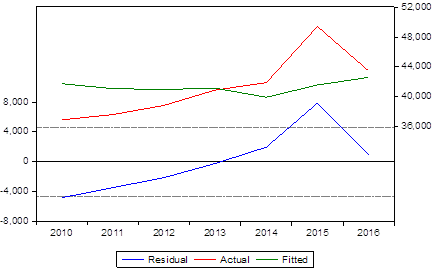 and the sum of residual estimation (Residual)

Generally, the appropriate statistical properties and tests obtained from the EViews system have shown that the model reflected in Equation (2) is adequate (true) (Appendix 1).

Therefore, we can state that, tourism is the most multiplicative sector. According to the feedback of our research we can say that the investments give us opportunities to get an effective result in any field of tourism, especially the hotel industry has a multiplicative effectiveness and it takes 73% of hiring from this angle, the correlation of investment and hotel industry is 0.93. During the development of this research, we discovered some setbacks, such as the lack of available statistical data. Moreover, another limitation of the study is related to the tourism revenues that are not noted in the statistical data included in this research..

Regression equation of the model

© 2019 The Authors. Published by Sprint Investify. ISSN 2359-7712. This article is licensed under a Creative Commons Attribution 4.0 International License.