This paper intends to discuss the changes for dependence tendencies (or called the associations) for the return rates of stock price indices and stock index futures before and during coronavirus (COVID-19) pandemic periods. The futures is a kind of financial derivatives and a hedging instrument (Hull, 2003; Johnson, 1980; Junkus et al., 1985; Park and Switzer, 1995). COVID-19 is a terrible disaster around the world till now and hit the economic, public health, and social living statuses. In particular, the stock price indices of the investing during COVID-19 climb higher than those before COVID-19. Thus, it would be interesting to discuss the associations between the stock price index and stock index futures. This is because the latter has the function of price discovery, which relates to the current stock price index.

Although the discussions of literature on the futures are always from the views of time-varying dynamics (Mehlitz and Auer, 2021), price discovery (Chen et al, 2021; Yang et al, 2021), arbitrage trading, term structure (Fonseca and Gottschalk, 2013; Tan et al., 2021; Yang and Chen, 2021), this paper tries to analyze the Taiwan stock index futures (TF) that is a financial derivatives of Taiwan stock price index (TAIEX) regressed by the stock price index and the MSCI Taiwan index (MSCI_TWI), then intends to find what are the changes of associations among them before and during COVID-19. However, the regression analysis shall follow the assumptions such as Normal distribution and the linear model form. Almost analysis methods are based on the Normal distribution assumption, but the actual data cannot satisfy this assumption unless the researchers transfer the data using variable transformation or some other function transformation. To solve the problem of the Normal distribution assumption, Golden et al. (2019) mentioned that the researchers should try their best to estimate the regression to decrease the mistaken effect from the model form. They tried to correct the MLE of the coefficient estimation from the aspect probability distribution. However, the probability distribution of data has different parameters. Due to mathematical deviation is difficult to obtain for the MLE estimator and to reveal the effects of characteristics from the probability distribution. On the other way, they can directly test the probability distribution of data.

Based on the background and literature, the past regression analysis and time series method, which depend on Normal distribution and linear form assumptions seem not to be a good analytic tool for financial data. Therefore, two important keys that we should do are (1) checking the probability distribution of data and (2) finding the estimated nonlinear functions of data as possible as we can.

First, observations, in reality, are not always from Normal distribution. If we always use a Normal distribution assumption that does not match the data source, wrong critical values will result in unavoidable and uncontrollable risks arising from the hypothesis and testing in regression analysis. This is why the theories cannot analyze the nonstationary state or very complex data.

Second, although econometrics exists the nonlinear regression or polynomial regression, researchers did not have a high willingness to analyze data with these two regressions. Therefore, the complex time-series data should be used the complex function form to fit so as to achieve the aim of accurate estimation. The advantage of accurate estimation is that the misspecification of function form for the expected values will not fall into the residuals which play a core role in the testing for regression analysis, such as heteroscedasticity and serial correlation.

Consequently, this paper proposes the financial data that include the trends of the TAIEX, TF, and MSCI_TWI before and during COVID-19. We test whether the three sets of data conform to the Normal distribution assumption of regression analysis, and then try to find the influence of COVID-19 on the three sets of data through the estimation formulas of nonlinear regression.

This paper proceeds as follows: Section 2 presents the methodology including the descriptions of data source and the theoretical methods of improved goodness of fit and nonlinear regression. Section 3 then describes the empirical research results and investigates the nonlinear estimators before, during COVID-19, and the whole observation period. Section 4 states the conclusion.

We choose the daily after-hour close prices of nearby-month TF from Taiwan Futures Exchange (TAIFEX), the daily closing prices of MSCI_TWI, and TAIEX. TF and MSCI_TWI are financial derivatives, which are derived from TAIEX that is the main stock price index in Taiwan. It employs the daily data of three kinds of closing prices over the period from July 18, 2019, to September 30, 2020, for a total of 296 observations, downloaded from the TEJ database. The reason for choosing the time period is that COVID-19 spread before and during the time so as to show the substantial impact on the Taiwan stock and futures markets. 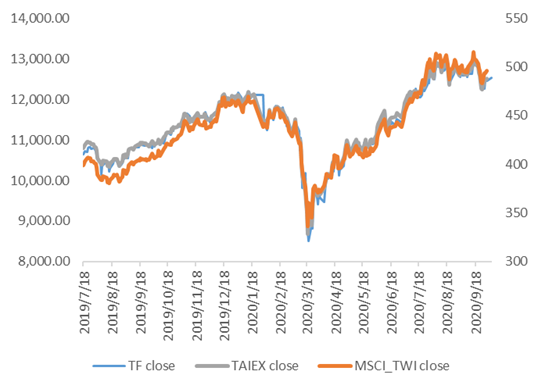 Figure 2-A shows that the TF return rates in March of 2020 spread widely and can be divided into different degrees of deviation before and after COVID-19. The figure seems to have a horizontal correlation as a belt. Figures 2-B and 2-C show that the spots are concentrated in specific intervals, but there are still extremes.

Figure 2. Scatter plots of TX with time, MSCI_TWI and TAIEX

2.2. Methodology of the Testing Probability Distribution

, j = 1, 2, …, k. The actual observations can be calculated and labeled as Oj. Then the Chi-square statistic is

where the degree of freedom is v = k – 1 – the number of point estimates. At the significant level, α%, we reject the null hypothesis when

occurs, implying that the data set does not significantly own the characteristic of Normal distribution.

Testing probability distribution only shows the characteristics of TF, MSCI_TWI, and TAIEX return rates. The regression analysis can display the associations of these three before and during COVID-19. The mathematical functions of estimators are assisting us to compare the differences before and during COVID-19 so as to know how COVID-19 hit the financial market in Taiwan. However, it is very difficult to satisfy the assumptions of regression analysis that we mentioned Normal distribution and linear model. Regression model,

, can be separated by two parts: the explainable part (

) and the unexplainable part (

). If the model form is wrong, then the model will become as

is the mistake of wrong model form, which still exists in the residuals as the sample size becomes large enough (Lee and Wang, 2021). The mistake induces that the residuals reduce their representativeness and have biases. In this paper, we follow Wang and Lee (2019) to build the nonlinear regression model in which there are 37 nonlinear function forms for each explanatory variable to be transferred. Suppose a generalized regression model is

is the TF return rate at tth day,

is the explanatory variable, βi is the coefficient, i = 1, 2, 3,  H(•) is the regression model form of the expected values of Yt, and

is the error term. Let H(•) become a nonlinear function of each explanatory variable and build a linear combination as (3).

follows the probability distribution of

. The nonlinear property is due to the transformation of

which should be calculated by 37 function forms. Since the linear association between the dependent variable and each explanatory variable, we choose as the optimal nonlinear function form (Zi( • )) using the highest correlation coefficient, that is max{r(Zi( • ),

)}, where r is the symbol of correlation coefficient. The main meaning of (3) is that we find the highest linear correlation of the transformed explanatory variable with

first, then regress the

on the transformed explanatory variables to get the estimated values (

According to the above findings, the TF, MSCI_TWI, and TAIEX return rates follow the Laplace distribution whose probability density function is

is the probability density function form of the random variable, K, whose value is

is the shape parameter and

is the location parameter. 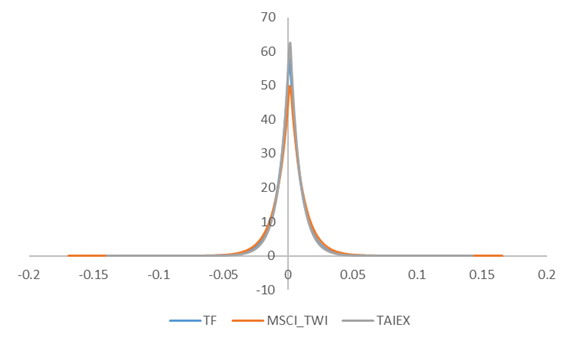 The three kinds of return rates have their respective probability distributions under different parameters, as shown in Figure 3. The first feature is that the location parameter, μ, is the central point at the horizontal axis where the three values of μ are very close and around 0.00153. The shape parameter (λ) determines the height of the figure. The order of λ is TAIEX return rate (131.179627) > TF return rate (120.037749) > MSCI_TWI return rate (104.286294).

The second feature is that the Laplace distribution is a kind of leptokurtic distribution with long tails. The long tails indicate that it is possible to occur extreme returns with very low probability. This long-tail characteristic also arises in the shifted exponential distribution. In addition, the long tails of the MSCI_TWI return rate are longer than the other two, implying the possibility of occurrences for the very extreme return rates. The MSCI_TWI return rate has more distinct volatility than the other two.

3.2. Results of Nonlinear Regression before and during COVID-19

We run the nonlinear regression and obtain estimators (11), (12), and (13). (11) is the nonlinear estimator for the whole observation period and decomposes into the periodic trigonometric function of the time variable, the Xe-X function forms of the MSCI_TWI, and TAIEX return rates. Xe-X is a kind of convergent function toward zero as X approaches infinity.

3.2.1. Comparisons of the Effects for the Time Variable on TF Return Rate

Figure 4. The contributions of the time variable on the TF return rate

Second, we find that the time variable function dominated by the data before COVID-19 is a periodically trigonometric function in (11), but the fluctuation of the time variable function composed in (11) is obviously lower than (12) and the negative return rate is easy to occur. This is because (11) considers both the values of the variables over the observation period and the most appropriate dependency relationship coordinated by the four sets of variables (see (11) and the orange line in Figure 4-A). 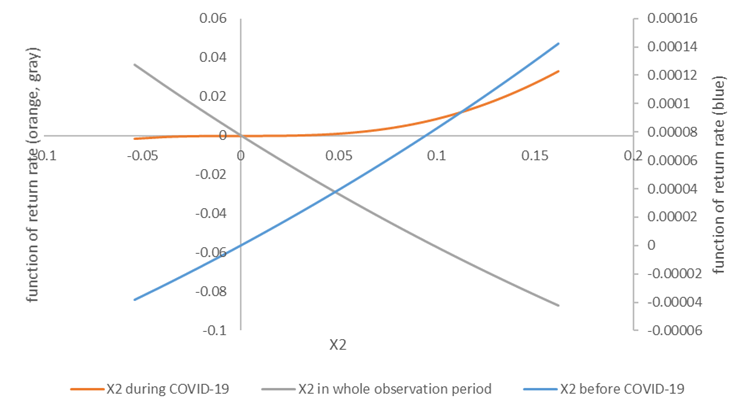 Figure 5. The contributions of the MSCI_TWI return rate on the TF return rate 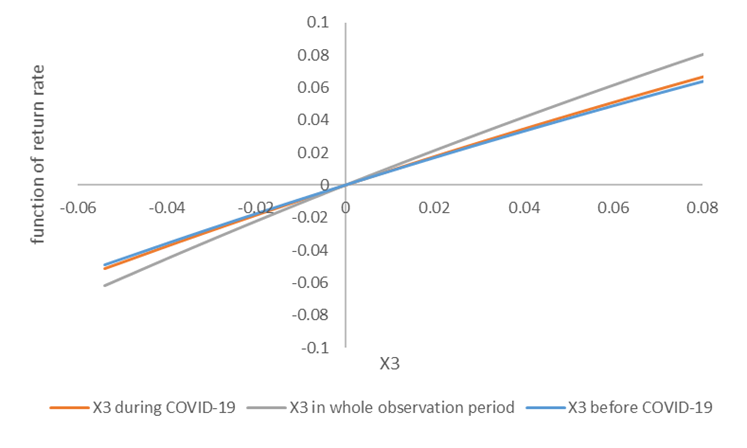 Figure 6. The contributions of the TAIEX return rate on the TF return rate

Appendix I. The 45 probability distributions

Table II. list of 37 functions for the explanatory variable in nonlinear regression

© 2021 The Authors. Published by Sprint Investify. ISSN 2359-7712. This article is licensed under a Creative Commons Attribution 4.0 International License.