The main purpose of the article is to study revenue and expense management system on the government budget in Azerbaijan, the activities of Oil Fund (SOFAZ) and its place in budget transfers. In fact, some sectors have managed to maintain an acceptable level of efficiency, according to the circumstances, however, most showed some inefficient levels in the management of resources and at the same time, it was discovered that most of the state budget revenues (approx. 50%) are formed in the oil and gas sector which this does not allow for sustainable economic development. Research work has been carried out on the basis of systematic analysis and methods. The practical significance of the study is in the implementation of the set of measures proposed in the article. It is based on the evidence that the mechanism for the use of oil revenues in Azerbaijan will be improved and the effectiveness of long-term management for government expenditures is ensured.

In accordance with the conditions of sustainable development, strategic foreign exchange reserves have been formed in Azerbaijan, confidence in the banking system has been restored, and sustainable financing resources of the state budget have been provided. All mentioned above is the result of sustainable and competent far-sighted economic reforms carried out in the country under the leadership of the President. Economic decisions taken beforehand have allowed macroeconomic stability to be further strengthened and diversified. From this point of view, the Global Competitiveness Index 2019 report, published by the World Economic Forum, illustrates it, as Azerbaijan ranks 58th out of 141 countries, up 11 places or 2.7 points from 2018 settled and left behind neighboring countries such as Turkey (61st place), Georgia (74th place), Iran (99th place) and occupying Armenia (69th place) (Republic of Azerbaijan, 2004, p.xiii). The indicator was determined on the basis of 12 indicators, averaging, which ranked 3rd on the sub-indicator "Burden of government regulation" (Republic of Azerbaijan, 2004, p.75). Singapore (Republic of Azerbaijan, 2004, p.507) and Hong Kong (Republic of Azerbaijan, 2004, p. 267) left behind other countries. This fact shows solely that under the leadership of President Ilham Aliyev, the country has been implementing effective state regulation.

One of the areas covered by the report is the item of checks and balances, and the indicators in this area can be considered positive, but there is a need to improve some sub-indices. Thus, according to the sub-index "Budget Transparency" of this indicator, Azerbaijan ranks 71st with 34.0 points (Republic of Azerbaijan, 2004, p.75). Another remarkable aspect of fiscal management is the existence of a certain disproportion in the execution of the state budget by months. In many years, the execution of the state budget in December is significantly higher than in other months, which in turn creates certain imbalances in the economy (Republic of Azerbaijan, 2016, p.28). For this reason, statistical analysis covering the state of implementation of revenue and expenditure parameters of the state budget in the reporting years, as well as the priority tasks and functions identified for budget execution is especially relevant.

For this article, we have used the following currency and equivalent units (Exchange Rate Effective December 30, 2019):

Some indicators have been analyzed in order to describe budget execution more obviously and make recommendations. Figure 1 shows that in 2019, state revenues amounted to 24 218.062 million manat against the forecast of 23 168.000 million manat. Compared to the forecast, 1 050.062 million manat or 4.5 percent, and compared to 2018, 1 709.192 million manat or 7.6 percent more was provided. It should be noted that if the actual revenues in the process of state budget execution are less than the established quarterly indicators, the Ministry of Finance informs the Cabinet of Ministers of Azerbaijan Republic if there is a threat of imbalance in the execution of the state budget, as well as the balance between revenues and expenditures. It is no coincidence that as a result of public finance reforms, the Republic of Azerbaijan received the highest score-A on the actual income indicator compared to the budget approved in the Public Expenditure and Financial Reporting (PEFA) assessment project for the Republic of Azerbaijan (World Bank, 2014). The report used data from 2011-2013, i.e. in that period the actual revenue was more than the budget revenue for all three years, and in 2012-2013 the budget revenue deviation was less than 5.3% (World Economic Forum, 2019, p.34).

Looking at the structure of actual state revenues in 2019, it consists of 11364.3 million manat or 46.9 percent of the transfer from the State Oil Fund of the Republic of Azerbaijan to the state budget, 10411.82 million manat and 43.0 percent of taxes, 2112.3 million manat or 8.7 percent of fees and paid services, 329.7 million or 1.4 percent of other revenues. As a result of the measures taken, the share of tax revenues increased by 1.8 percent due to transfers compared to the 2019 budget data. The same encouraging tendency is observed in comparison with 2018. Thus, as a result of the fight against the "shadow economy", the share of taxes in 2019 revenues increased by 968.2 million manat and 1.0 percent, and the share of duties and paid services increased by 461.5 million manat and 1.4 percent compared to 2018. Theoretically, if taxes don’t take basic part of budget revenues, essentially it is the sign of that budget expenditures are financed by budget deficit. In this regard, the budget revenue policy should also take into account the direction of increasing the share of non-oil revenues in budget revenues (Jafarli, 2020). On the positive side, it is possible to predict that in the nearest future the process of solving modern problems of development on non-oil sector in Azerbaijan will intensify.

The transition to a qualitatively new stage in the practice of public finance management in Azerbaijan requires the implementation of reforms in all areas, the implementation of measures that will stimulate the development of the non-oil economy. In recent years, as in other sectors of the economy, significant reforms have been made in the area of public finance management, including more transparent and flexible management of public and consolidated budget expenditures, free management of the state budget balance, state-funded and financial assistance. Financial operations related to the receiving organizations were carried out in accordance with international accounting standards, extra-budgetary funds received by budget organizations for their work and services were included in the state budget and consolidated budget, respectively.

At the same time, within the framework of regular cooperation and interaction with international financial institutions, a new stage of public finance management, further improvement of the regulatory framework, budget management mechanism related to the budget process (budget preparation, approval, execution and control), medium and comprehensive measures have been taken to continue reforms to implement fiscal policy that ensures long-term macroeconomic stability, financial and debt discipline, as well as to increase public awareness of the budget process (Aliyev, 2019).

Expenditures of the state budget in 2019 amounted to 24 425.914 million manat against the forecast of 25 190.000 million manat. Compared to the budget, 764.086 million manat or 3.0 percent less, and compared to 2018, 1 694.269 million manat or 7.5 percent more was provided. This information is shown visually in Figure 4. It should be noted that in 2019, compared to previous years, there is a promising improvement in budget execution. Thus, in 2019, expenditures were made with a deviation of 3.0 percent. However, in the World Bank's Public Expenditure and Financial Reporting (PEFA) assessment project for the Republic of Azerbaijan it is stated that expenditures in 2011 exceeded the approved budget by 18.4 percent, and in 2012-2013 budget expenditures deviation was less than 10 percent. was less. For this reason, it received a C rating on the actual expenditure indicator compared to the budget approved in that report. (World Economic Forum, 2019, p.30-31).

Comparing the actual government expenditures of 2019 with the budget of that year, savings were made on all other service expenditures, except for services not related to the main sections. However, when looking at the items, for certain reasons, high deviations from the approved budget are revealed. If we look at the expenditures in 2018, in 2019 in the areas of expenditure on "General public services", "Housing and utilities", "Fuel and energy", "Economic activity" and "Amount of difference on the revaluation of foreign exchange positions" there is a decrease in the range of 15-86 percent. Expenditures on health and education are in increase compared to 2018, which will strengthen the social protection of employees engaged in scientific activities, including youth, and prevent "brain drain" (Republic of Azerbaijan, 2018). The table below shows the comparison of government expenses in Azerbaijan in 2018 and 2019. 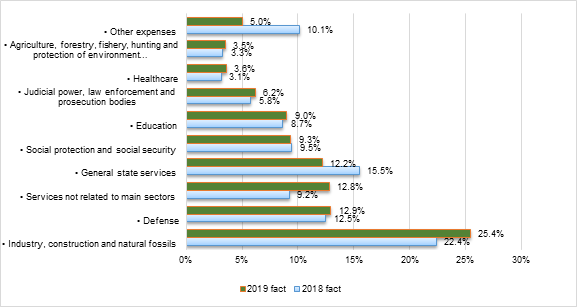 Thus, today the control over budget execution remains the main goal in ensuring long-term stability and stable activity for the economy of Azerbaijan. Looking at the execution of the state budget in 2019, we observed that non-oil revenues allowed to finance only 53 percent of state budget expenditures. Continuation of this process in the coming years creates risks to the sustainability and burden of public finances, especially the state budget, effective management, and weakens private entrepreneurship. In order to improve large-scale oil revenues as the main channel of the state's direction to the economy, it is expedient to solve the following tasks:

• the dependence of the state budget and the exchange rate on oil should be reduced;

• creating a fund for future generations and spending it;

• application of the "golden rule" to eliminate the dependence of the state budget on volatility in oil revenues;

• reducing the dependence of the state budget on transfers;

• apply experience in the effective use of revenues from the study of processes in the financial markets of countries rich in oil;

• to study the structure of the budget of developed countries through the analysis of expenditures, to discuss it in the direction of its application in Azerbaijan.

© 2020 The Authors. Published by Sprint Investify. ISSN 2359-7712. This article is licensed under a Creative Commons Attribution 4.0 International License.